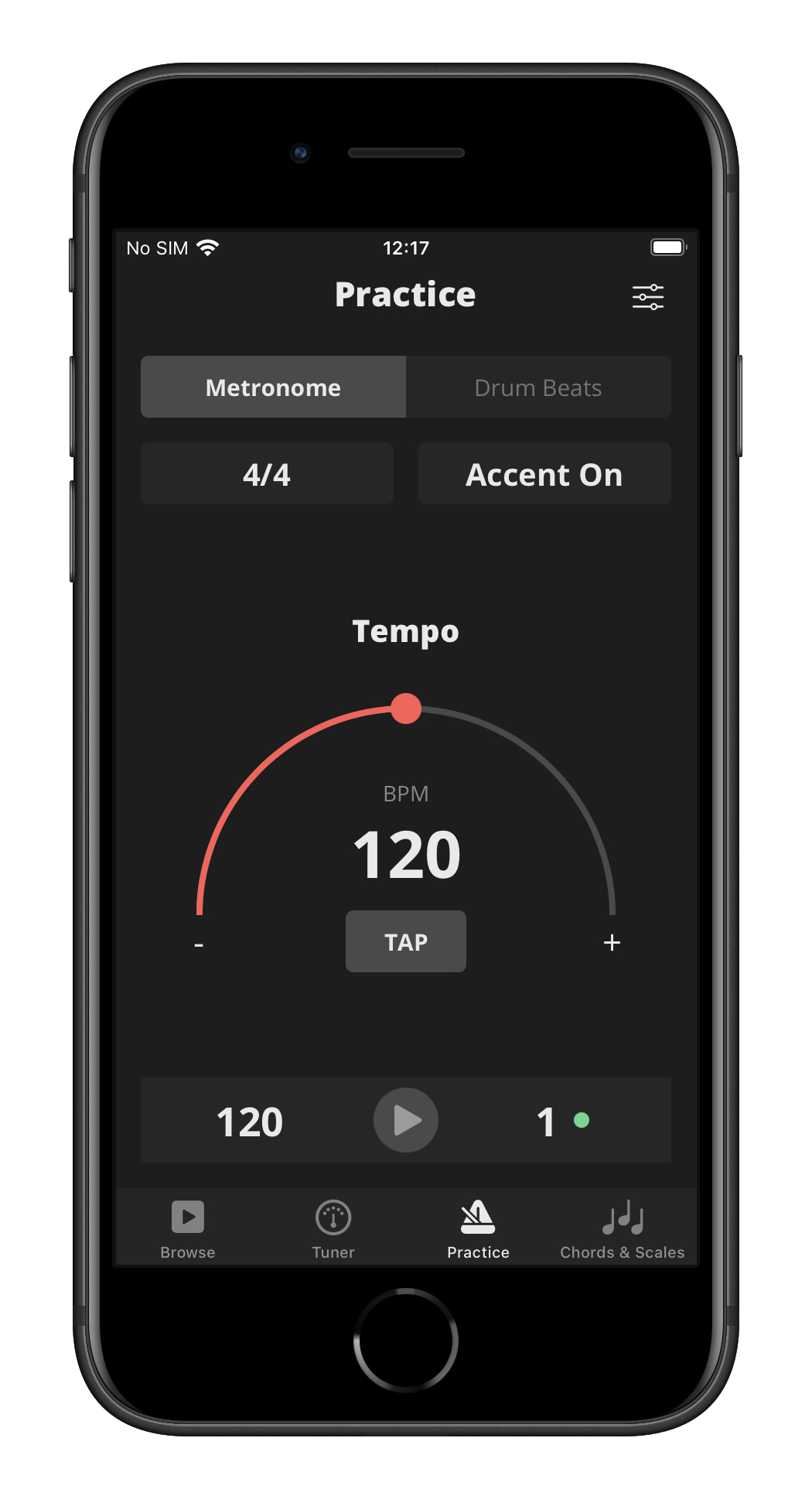 Guitar App is a tuner, metronome, chord finder and guitar lessons all in a single free app! The metronome tool gives you the ability to tap in any tempo and choose from a wide variaty of time signatures and accent patterns. Time signatures are grouped under 3 categories; simple, compound and complex so it supports many time signatures including 2/4, 3/4, 4/4, 6/8, 9/8, 12/8, 7/4, 5/4, 10/8, 11/8 and more!

Get the app for free!

What is a Metronome?

A metronome is a device which is used to help musicians keep accurate timing as they practice or perform music. It does this by producing an audible click or pulse at a regular time interval which is usually referred to as tempo and is measured in BPM (beats per minute). The audible click then serves as a guide for the musician to stay in time and on the beat. Metronomes are particularly useful for early learners who often struggle with keeping time but even professional musicians use metronomes regularly during practice and performance to maintain constant tempo throughout a piece of music. Traditionally metronomes were mechanical devices but these days they are more often electronic devices or software applications.

How to use a Metronome?

At the most basic level, the first thing you'll want to do is set the tempo you want to practice at. Most metronomes default to a setting of 120 BPM which is a common tempo for many styles of music. A list of tempo markings commonly found in classical music notation can be seen below. Tempo is usually set with a tempo control on the metronome but more modern metronomes often provide a tap tempo feature which allows you to tap a few beats at the tempo you desire. In this instance, the metronome calculates the BPM from your tapped beats. More advanced metronomes may also allow you to set the time signature at which you want to practice. Most metronomes will default to a time signature of 4/4 (4 beats per measure) but many other time signatures exist. Waltz time can be achieved by using a time signature of 3/4 (3 beats per measure). Most metronomes also allow the first beat of each measure to be accented so that you can hear the start of each measure more easily. Some more advanced metronomes allow for complex time signatures such as 7/8 or 10/8 to be selected and for custom accent patterns to be programmed by the user.

Beats per minute or BPM is the unit of measurement commonly used for Tempo. A tempo of 120 BPM implies that there will be 120 beats sounded in the duration of one minute. Given that there are 60 seconds in a minute, this equates to two beats per second.

The code has been copied to your clipboard. Please make sure to read our Terms of Use and don't forget to provide a backlink.